To All the Boys I've Loved Before & P.S. I Still Love You
by Jenny Han


Lara Jean is going into her junior year of year high school.  Her older sister, Margot, is heading to college in Scotland has advised her that this will be the most important year of Lara Jean's high school career.  Margot breaks up with her long-term boyfriend who is also the girls' neighbor.  Their mother passed away when they were little and their father, a medical professional, and their nine year old out spoken sister round out their loving and supportive family.


Even though Lara Jean has never been in a serious relationship, she has had many crushes that she has literally "written off".  When a boy/guy in the past, that she has liked hasn't shown mutual feelings for her, rather than sulk about it/let it get her down, Lara Jean simply sits down, writes the guy a farewell and moves on with her life.  There have been several letters written, and one day Lara Jean realizes that someone found her letters and sent them the guys she previously said "good-bye" to...including her sister's ex-boyfriend who still remained a close friend of the family even after the break-up.  Now Lara Jean has guys seeking her out, looking for answers, and making Lara Jean's life a whole lot more interesting.

The sequel/companion follow-up continues on with Lara Jean's "choice" (I don't want to say which guy she chooses and give it away).  She seems very happy with the outcome of her choice until a boy from one of her past letters shows up in her life and makes her second-guess her decision from the first book.  The witty dialogue and humorous scenes continue on!


Lara Jean is an incredibly love-able character.  The witty dialogue will cause you to smile and laugh out loud.  The ending for either book is not what I expected, but I still enjoyed where the books left me as a reader. Worthy reads if you like realistic-fiction. 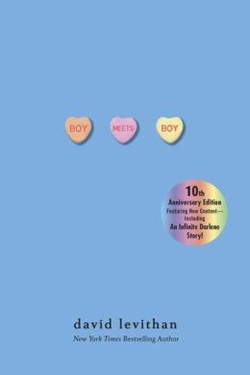 
Paul, a high school sophomore, is openly gay.  Just getting over (sort of over) a relationship that ended badly with Kyle, he has met a new student, senior Noah, who is also homosexual.  The two click right away, but both have been burned in past relationships.  Paul's good friend Tony is dealing with when the right time will be to come out to his parents, his best friend Joni is dumping her boyfriend Ted for the hundredth time, but this time it might be for good in order to date Chuck, who is a chauvinist tool. Infinite Darlene, is the star quarterback, who also is a drag queen off the field and there are so many more eclectic characters in this high school student body to keep the plot moving and interesting.


The high school is fictitious as is the town, but I wish there were more communities out there like this. There are some characters who struggle with accepting others' lifestyles that are different than their own, but I have to say it's refreshing to read a book, where the majority of the student body is very accepting and as a whole, supportive allies for one another.  Your self-worth is based on the content of your character and level of kindness, not whether or not you like boys, girls, or both.


This novel was published in 2003 which surprised me since it's a bold step in raising GLBT awareness, but I'm so glad this is another title I can put on my shelf that many of my students will be able to relate to and/or appreciate. 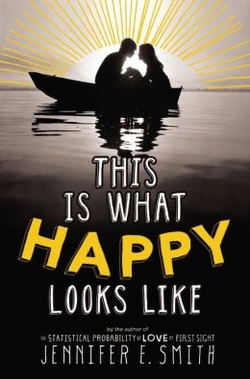 This is What Happy Looks Like by Jennifer E. Smith


Ellie is a small town Maine girl with a big secret.  Raised by a single mother, Ellie is the illegitimate child of a married politician from Washington D.C.  Ellie's mom protected her by changing their last names and moving to a quiet community when Ellie was a little girl.  Ellie's short-term dream is to earn enough money at her two summer jobs to be able to attend a Poetry Writing camp at Harvard in two months.  She's been accepted, but money is tight in her home.


A movie crew comes to town and one of the main characters of the film is played by a teen heartthrob actor, Graham.  Ellie doesn't know this, but the guy she's been emailing due to an accidental typo is  this same celebrity.  Graham knows Ellie is in the town he's shooting in, finds her, introduces himself and the will-they/won't they fall-in-love romance begins.  Combine this with Ellie's struggles with whether or not she wants to have a reunion with her biological father and her protective mother who does not want Ellie to be swarmed by paparazzi, and you have an engaging modern fairy-tale.